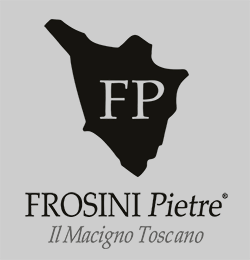 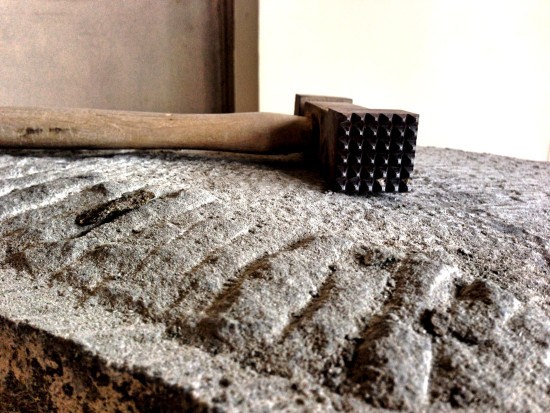 I’m really happy to be guest of Frosini Pietre and its blog. It was a pleasure to visit the workshop and understand better the passion and the hard work that stands behind every single stone worked. Here you’ll find some tips to visit the area of Lastra a Signa, where the company is located, and that you can easily reach by train or by bus from Florence city center.

Lastra a Signa: the stone city

I was really surprised by the beauty of this town. I actually worked there for almost a year, but I never really discovered its tourist-side and was quite impressed by its beauty. Lastra a Signa was actually an important medieval hamlet under Florence power, located along the Arno river.
The old massive medieval walls, rebuilt between 14th and 15th centuries, were probably redesigned by famous architect Filippo Brunelleschi in some part. They still enclose the city center and you can admire their beauty by walking along the outer limit. You can also see few watch towers and the three main gates of the old medieval hamlet. Portone di Baccio is the best preserved gate, as well as the tallest tower of the city.
The center of Lastra a Signa is quite small, only few streets cross it. Along Via Dante Alighieri there is the old Spedale di Sant’Antonio, i.e. a refuge for poor and ill people, built in 1411 by Florentine Guild of Silk (Arte della Seta). Legend has it that Brunelleschi worked at this building, but there are no real proofs. Still it has a lovely loggiato with elegant black and white decorations. Over the centuries the Spedale was transformed and used as stables, warehouse and market. Nowadays is not open to the public except during exhibits and events.
In front of the Spedale you can admire the particular Tabernacle of Podestà dating back to Renaissance. It’s depicted a graceful Madonna with Child between Saint John the Baptist and Saint Francis, while in the volta there are the four Evangelists and the Holy Father. The Annunciation that was originally on the external facade of the tabernacle is now inside Palazzo del Podestà. This building was originally the residence of the local administrator, called Podestà in Italian. On the facade you can still look at some coat of arms reporting both the family name and the date of service. In late August I recommend the Fiera di Mezzagosto, whose origins date back to the Middle Ages.

Not far from the center of Lastra a Signa there is medieval hamlet of Malmantile, whose name literally means “bad tablecloth“. Legend has it that Saint Ambrose, future Archbishop of Milan, stopping by the local osteria together with Saint Zenobius of Florence, cursed the landlord and his family for their bad hospitality.
Later in time 17th century painter Lorenzo Lippi described the hamlet of Malmantile as one of the most beautiful places in the area: “it looks like it was created to be the eighth marvel of the world“. Nowadays this tiny hamlet is still enclosed in its massive walls, built in 15th century. Unfortunately there is not much to see, since most of its artworks are disappeared like the altar piece by Domenico Ghirlandaio.
Even though it’s pretty much a residential town, I still recommend a visit because the location is unique. I also suggest you continue you journey along the road to Ginestra Fiorentina. This country road is the typical Tuscan road offering great views over the countryside designed by rolling hills and kilometers of vineyards.
If you wanna see Malmantile back to its original splendor I suggest to plan your visit during the Medieval Festival in early June. Knights’ fights, flag throwers shows, beautiful costumed figures and great food are the ingredients for this particular event.

One of the most talented and famous tenors in the world bought a luxurious villa in the surroundings of Lastra a Signa. He was the unique opera singer Enrico Caruso, who bought Villa Bellosguardo in 1906. He and his wife Ada Giachetti felt in love with this place, called “beautiful view2 for its stunning views, and spent quite some time here until 1921.
The Villa was built in late 16t century for Abbot Alessandro Pucci together with a large park based on the sketches of Tribolo. It was richly decorated, but after Caruso’s death the estate became property of several families, that partially destroyed its original beauty. But still the gardens are incredibly beautiful and deserve to be visited. On the first floor there is the Enrico Caruso Museum, the only one in Italy dedicated to this great tenor.
The museum preserves some valuables objects of the tenor, like original pictures of Caruso and his family, as well as writings and sketches made by him. Going though the rooms you can understand that he was actually a talented artist with a smart and playful personality. You can also admire authentic stage costumes, billboards and other memorabilia of Caruso and his international career.

The art of Macigno – not every stone is serena

The name and history of Lastra a Signa and surroundings are strongly related to sandstone. Lastra literally means paving stone. The center was renowned for its stone workers and quarries. During the 19th century there were about 500 stone workers. One of the last stone worker remained in the surroundings of Lastra a Signa, more exactly in Poggio alla Malva was Floro Poggi. He was the one who taught to Frosini family the traditional process to work sandstone.
Frosini Pietre was originally a building and marble company. So when Frosini family decided to start working with sandstone it had to rethink its working process. They bought the sandstone quarry of Caprolo in Greve in Chianti, hired Floro as master stone worker and start this new adventure.
Sandstone, or better Macigno di Greve, is a very peculiar material and has been used since ancient times in Tuscany for any kind of building. It’s that typical gray stone you see as pavement in piazzas, as frame for windows, doors for buildings and churches. It’s most famous as serena stone (pietra serena). The main difference between macigno and pietra serena is the color: the first has a typical green gray color, while serena stone has a light gray color.
This natural material is not very widespread nowadays, since its working process is difficult and you really should have the traditional know-how to do it. Well, this is what I think is the main strength of Frosini Pietre. They learned the basics and traditional know-how from old stone workers and transformed it using available technologies. In addition I was quite impressed in learning how the entire working process is recyclable: the water used to cut the stone is filtered and reused, the stone waste is brought back to the quarry in order to recreate it over the centuries.

5 places where to look for Frosini artworks

After learning how to work with Macigno di Greve, Frosini Pietre was hired to do some great works all around Tuscany. Why? Because Macigno di Greve stone is a local stone that perfectly fits the authentic structures of almost any place in Tuscany! Here the most fascinated for me:
Brunelleschi’s Cupola eyes – when you look up at the Cupola of Florence Duomo you’ll see some circle windows. The frames of these windows, looking much like small eyes of the dome, are made in Macigno di Greve;

Piazza della Signoria paving – when I was a young girl Piazza della Signoria was completely renovated, due to the discovery of Roman thermal baths underneath. The new paving between the equestrian statue of Cosimo I and Gucci Museum has been made using Macigno di Greve;
Piazza delle Carceri paving – this lovely piazza in Prato city center has been recently renovated and repaved with Macigno di Greve;
Monteverdi Marittimo and Castelnuovo Val di Cecina – both these little towns in central Tuscany have chosen to use Macigno di Greve for the paving of their most important piazzas and areas. 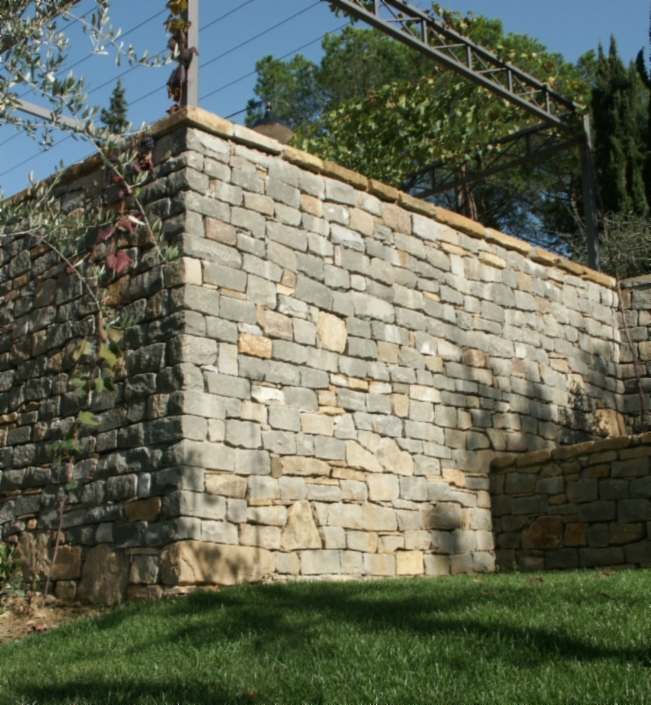 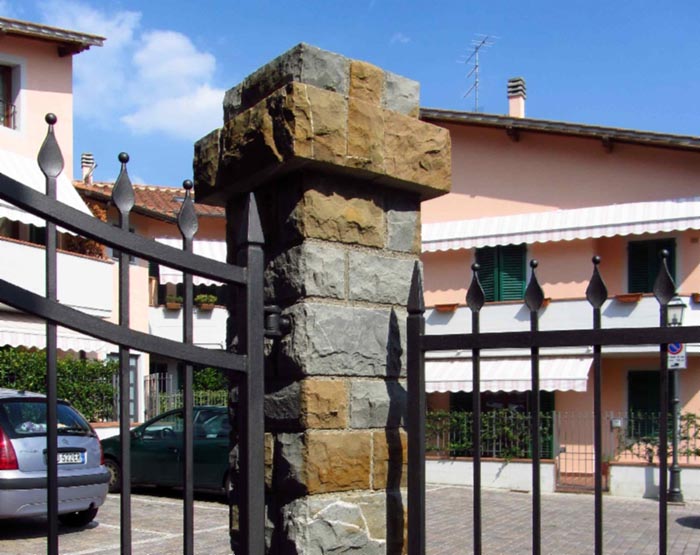 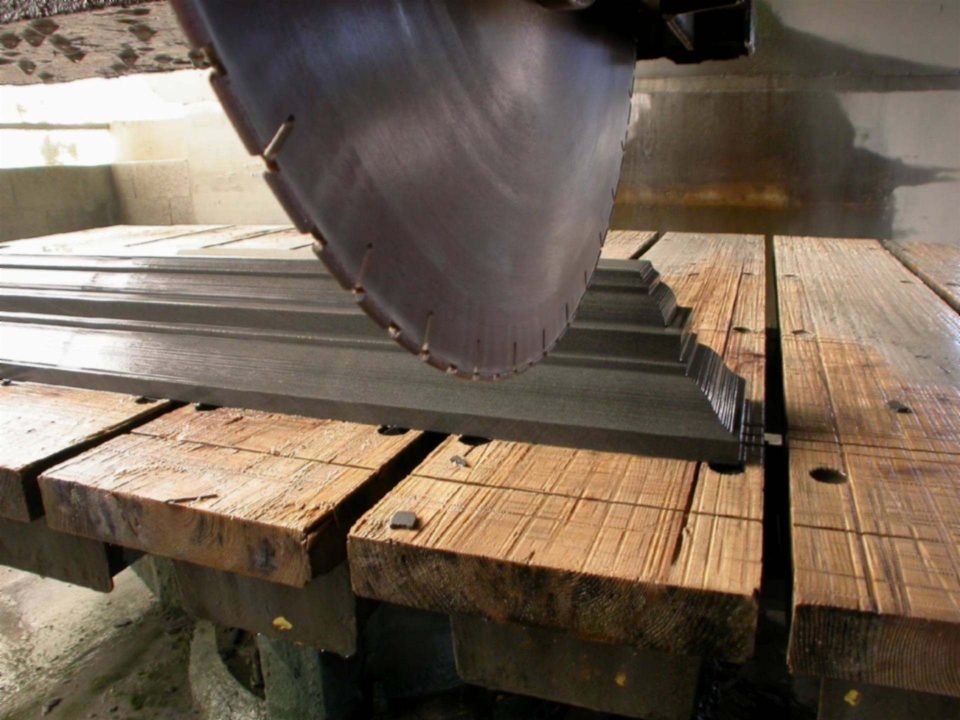 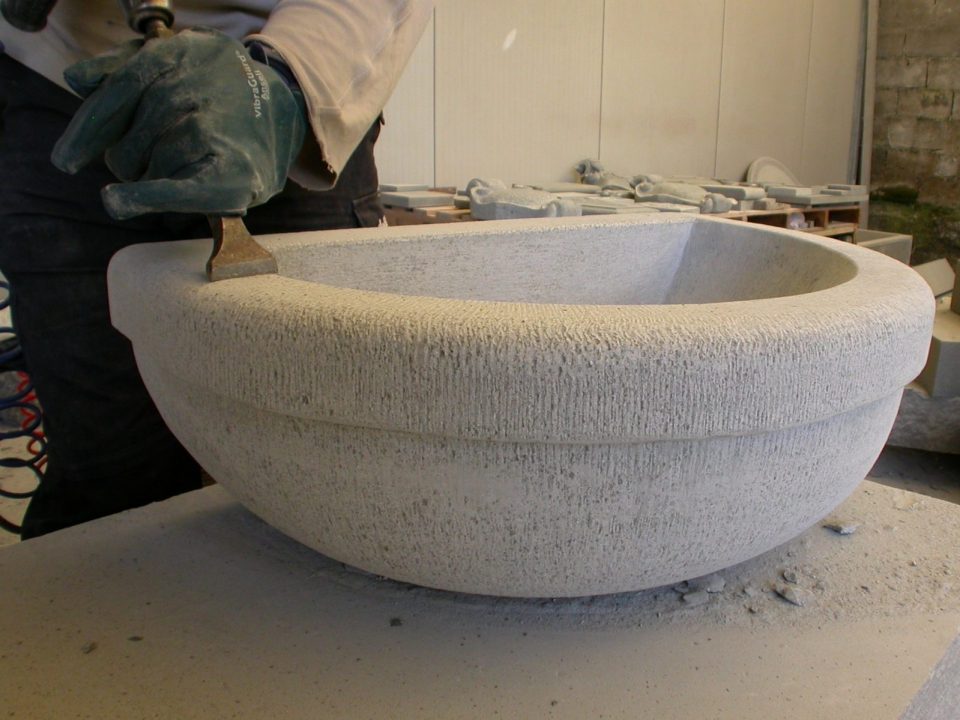